Artistic Missions Team Reaches Out to Earthquake Victims in Italy

On today's article from the Archives, read about an OM Arts trip to L'Aquila, Italy after the earthquake in 2010. The team was tremendously encouraged by the story of Antonella, a student who survived the earthquake and became a Jesus follower. The team created an art exhibition in the town square, artistically depicting Antonella's story in the very center of it. Find out more below!

r after an earthquake hit the town of L'Aquila in central Italy, citizens remain angry, depressed and frustrated. Except one.

A student asleep in her dorm when the earthquake hit, Antonella flew out of bed and cowered under a table, crying out to God to save her. In those horrifying moments, she gave her life to Christ—a true 'foxhole prayer', bearing fruit a year later. Miraculously, Antonella escaped; the stairwell in her dorm collapsed, but she found herself outside the building, running up the street away from the crashing structure.

Behind her, a human pyramid formed to rescue those trapped on the dorm's upper floors. Several students died, but most made it out to safety. If you ask most Aquilinos about the earthquake, they will share their grief, their anger and frustration. If you ask Antonella, she will answer that it was the day her life truly began.

An OM ArtsLink short term missions team visited L'Aquila with the desire to bring a message of healing, salvation and hope. A local pastor introduced the team to Antonella.  Her joy, energy and laughter were infectious. Antonella became the team's inspiration as they began to sketch, photograph, and paint her story.

While the goal was to bring a message of hope and restoration, God seemed to continually point to the corruption. That had to be dealt with first; if the city was to be rebuilt, its citizens would have to rebuild their hearts. Not an easy message to deliver! But in Antonella, a person whose heart had been radically changed, we had a compelling story. Rather than succumbing to the fear and blame, Antonella found her hope, strength and joy in Christ. The OM Arts team focused on that, producing 40 pieces of artwork that captured her story, and called the Aquilinos to examine their hearts. An exhibit was created in the town square and the final section portrayed the refreshment and healing that can come when God renews the heart.

The international OM Arts team literally created an outdoor gallery out of the rubble, fencing and scaffolding that surrounded them. They created a circular gallery, surrounding Antonella's “foxhole” table. On the table: her story, with a stone sculpture of the cross, created from the rubble by our artist from Hong Kong. Hundreds of people filed through, reading her story, or hearing it personally from Antonella, studying the artwork, reading the artists' statements, talking with OM Arts team members,  responding with written prayers on paper bricks, and posting them on our simulated “brick wall”—symbolizing a rebuilding of the walls of the city. Many lingered for over an hour. 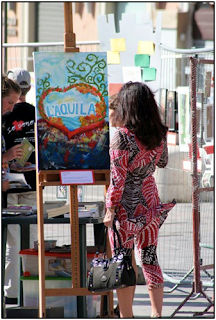 Countless conversations and scores of books and Bibles went out to the hundreds of visitors that were welcomed. Antonella's story also went out in the form of 500 printed brochures. Seeds of hope and truth were sown and will hopefully be watered by our loving Heavenly Father, who desires good things for the people of L'Aquila.

On the cover of the brochure of Antonella's story was the following scripture.

“Though the mountains be shaken and the hills be removed, yet my unfailing love for you will not be shaken nor my covenant of peace be removed,” says the Lord, who has compassion on you.”—Isaiah 54:10

Shortly after the OM Arts team visited the city, two more earthquakes hit. The destruction in L'Aquila is immense, and our continued prayers are with the people of this city.

More in this category: « Sounds of Global Worship: Mongolia Completing Part of the Journey »
back to top
© 2022 Inspiro Arts Alliance. &nbspA ministry of OM.
Some Photography provided by Garrett Nasrallah & Fritz Liedtke.