The Way, the Truth, and the Life

I rekindled my passion for painting in 2016 when I switched from working full-time to part-time. A friend connected me with her art teacher, and, for practical reasons, I learned acrylic painting. Inspiration for my first painting was from the cover of a Christian book, sitting on the side-table next to my bed. It caught my attention, and “Psalm 23” became my first attempt. Learning by imitating is a good start for beginners. I began using Google to find images I could imitate. Very soon, painting Bible ideas became my focus. Eventually, I was thrilled to participate in the Singapore Bible Society’s Annual Art Competition for two years in a row, painting pieces on Hope and Promises in the Bible and People in Need in the Bible.

When I painted this Christmas piece, I didn't begin with this title. I remember painting just a simple manger scene background for a Christmas skit performance on board the OM ship the MV Doulos in 1988. This manger image with the angel Gabriel appeared heart-warming. On second thought, I realized this angel could also be the one who appeared to the shepherds in the fields. The sky, more like the universe, humbly revealed the glory of the Lord on the night Jesus was born.

Jesus' baptism marked a significant milestone in His life, ushering in His ministry journey. The event involved John the Baptist filling his role as the Prophet who paved the way, the humility of Jesus fulfilling His need to be baptised as a man, and the affirmation of Jesus by God the Father, with the symbol of a dove descending upon Jesus at the Jordan River. It reminds us that baptism is an essential milestone for a new believer, too. It's also a mark of identity – a sign of victory (overcoming death) and the birth of a new life. It reminds us of the truth.

Another significant symbol of Jesus is ‘the Good Shepherd.’ The Good Shepherd is not only willing to give up His life to protect His sheep, but He is the Life. He promises those who believe and follow Him will have Life, and Life abundant (John 10:10, 11).

To connect the three images into one coherent painting, I could only think of a road leading in-and-out of the manger, as well as parting the sheep in the field and Jesus at the Jordan River. The road signifies that Jesus is the Way, the only way to God the Father and for us to know Him as our God. We will need to thread a narrow road to the kingdom of Heaven, through Jesus our Saviour.

Christmas is not just about singing carols, and after Christmas, comes Good Friday and Easter. The essence of Christmas is this: ‘The Word became flesh and made His dwelling among us. We have seen His glory, the glory of the one and only Son, who came from the Father, full of grace and truth’ (John 1:14). ‘In Him was life, and that life was the light of all mankind’ (John 1:4). 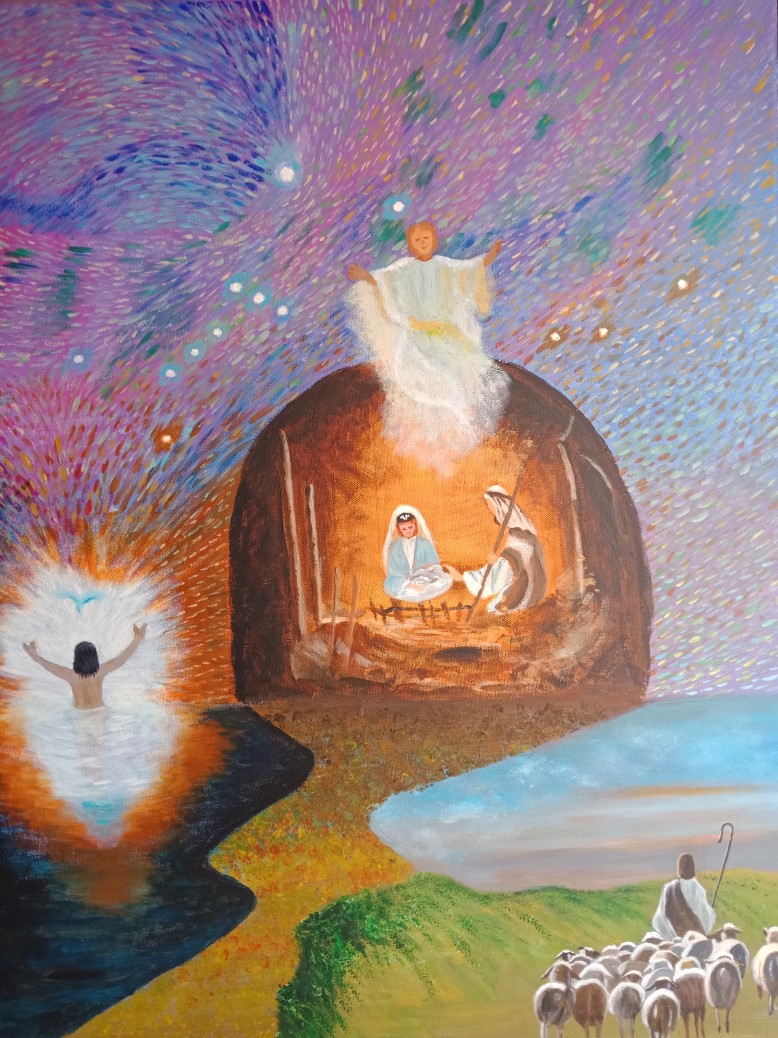 More in this category: « Little Birds and Broken Hearts Healing the Fractures: The Blessing Belgium »
back to top
© 2021 Inspiro Arts Alliance. &nbspA ministry of OM.
Some Photography provided by Garrett Nasrallah & Fritz Liedtke.