Hope for the World: An Outreach on the Welsh Canals

If you found yourself on the canals in Chirk, Wales earlier this month, you might have seen an interesting site – seven artists aboard a canal boat, painting, chatting, and sailing. The seven women – from Wales, the Philippines, Taiwan, Hong Kong, and Nigeria – hired a 21-meter (69 foot) boat and were on a mission to share the hope of the gospel through art.

The idea started with Janice Taylor, an artist and OMer in Wales. She makes her home in Chirk where there are canals that have existed for centuries. At Easter, Janice participated in an outreach on the canals where she presented her “hopeless board” (more on this shortly). Not long after, as she was pondering what to do with her impending retirement, it occurred to her that she could start a floating studio of sorts and minister to the people traveling the canals. She discovered that there is a Boater’s Christian Fellowship as well as a Waterway Chaplaincy program. To have a more official capacity on the canals, Janice became a chaplain for the waterways. As she continued praying about it, the pieces came together for her to lead a short-term trip. Six other women signed up and paid their way to come on the outreach, Janice hired the boat, and they set sail. 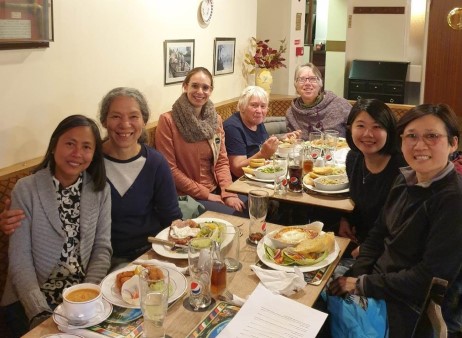 The trip lasted a week, starting in Chirk and making the several days trip to Whitchurch and back again. The boats are only allowed to stay at one mooring place for forty-eight hours at a time, so the ladies moved fairly frequently. Each day, they had breakfast and a devotional time before stationing themselves with their canvases and paints along the canal. Janice shared her “hopeless boards” with people. To do this, she takes a canvas and covers it with paint of random colors in random places. Striking up conversation with passers-by, she will say, “It’s hopeless, isn’t it?” In the ensuing conversation, she asks them to take her brush and some paint and paint the color they think of when they think of hope. This allows her to ask them where they find their hope and, if they agree, share with them the source of her hope in Christ. The other artists were doing watercolors, and they were at first discouraged by the lack of conversation they had with those on the canals. One of them, who is eighty-five years old, decided to adapt her method so she could talk with more people. She painted a globe and wrote the question, “What is wrong with the world?” around it. Then, she engaged those walking past by asking them to write on the board what they thought was wrong with the world.

The other artists painted cards on which they wrote verses (some in Mandarin as this was their heart language) and gave them out to people. They also had the opportunity to hand out tracts, Hope magazines, and a Bible. Janice was so encouraged watching the other ladies get involved, saying, “They realized it wasn’t just about sitting and painting – it was about something they could give away.” Her heart on this trip was for them to realize that they could use their artistic gifts for the Lord. At the end of the day, they always shared a meal together and took turns sharing their testimonies. These times of relationship led to close bonds and encouragement for each of them by the end of the week. 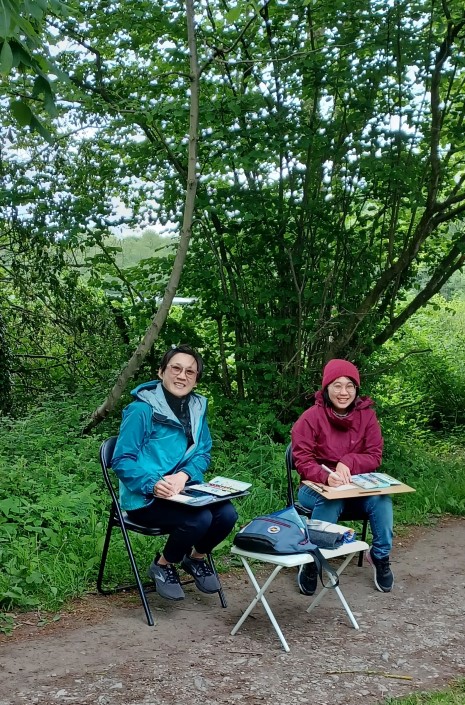 Janice is looking forward to seeing how the Lord continues to work. She is hoping to purchase a boat of her own (smaller than the one they used on the outreach) on which to do full-time canal ministry. She is also planning another outreach trip for next year. Janice said, “What’s next? I’ll keep walking – with paintbrush and pencils in hand and see what God does.”

More in this category: « The Power of the Family of God Merging Art and Faith: The Story of an Incarnate Graduate »
back to top
© 2022 Inspiro Arts Alliance. &nbspA ministry of OM.
Some Photography provided by Garrett Nasrallah & Fritz Liedtke.