Our teammates in Kosovo, Aaron and Shpresa, hosted a songwriting workshop in December! They had participated in workshops like this with Heart Sounds International (HSI), but this was their first time to lead one of their own.

They are both burdened by the lack of original worship songs in the Albanian language and feel that hosting songwriting workshops could be a way to begin to change this. For this workshop, they felt led to focus on Christmas songs, as there are not many Christmas songs in Albanian.

Our friend Jon helped with the workshop, doing the primary Bible teaching. They spent two days focusing on Advent and the third on Christmas. There were eight participants total but a core group of six who were able to come to all three days of the workshop. Five new songs were written and have now been recorded! Read more below from Aaron and Shpresa about the workshop!

1. What did a typical day during the workshop look like?

We tried to break the day up into "cycles" which lasted about two hours. The cycle started with 15-20 minutes of talking about certain topics, themes, and Bible verses that we wanted to focus our songwriting on. The next step was breaking up into different groups to begin writing a song. After about an hour and a half or so of songwriting, we would then record a simple demo recording of where the song was at that point and take a break. After the break, we would then spend another 1.5-2 hours working on the songs. This was the basic format each day, but we never did more than two cycles a day and we always had a meal together –  lunch the first two days and dinner on the last day as a celebration of the end of the workshop.

2. How have you seen the Lord use this workshop?

It was great to see God bring five new songs to life that we hope can be used by the Albanian-speaking church for many years to come. Even though we didn't have the finished recordings of the songs out until mid-December, we are aware of a couple of churches that have already used them. We've also been encouraged by the positive response of many people who have heard the songs. It was also a great first experience trying to do a workshop like this for the first time without HSI, and it gave us the confidence to do it again. It was also the first time for one of the people attending to ever be a part of something like this, which later inspired them to write another song after the workshop.

3. What was the most surprising thing in this process?

4. Now that the workshop is over, what is next (for both the songs produced and the people)?

The songs are not out in the world (YouTube, Spotify, iTunes, etc.) we also have chord charts for all of them, so they are available for anyone to use/sing at their church. Most of the people that were involved in the workshop we have already been working with on a regular basis, so that will continue. This year we hope to grow deeper together and, Lord willing, write more songs together as well as some other projects we are praying about.

5. Will there be future workshops?

To listen to the album that the group produced, please click on the image below! 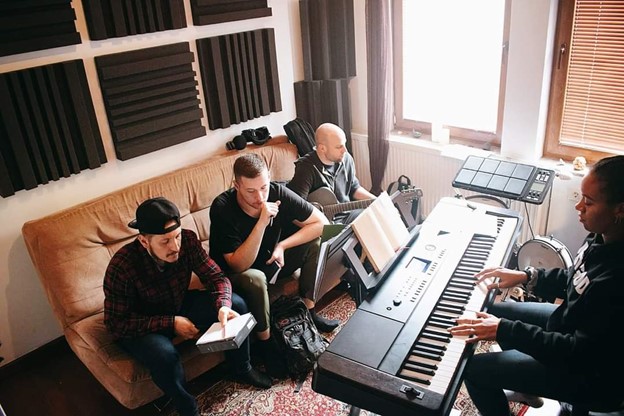 More in this category: « Spray Paint and Acrylics: Thoughts from the Virtual Artist Residency From Rejection to Hope »
back to top
© 2022 Inspiro Arts Alliance. &nbspA ministry of OM.
Some Photography provided by Garrett Nasrallah & Fritz Liedtke.