Diwali and Prayer for the Hindu World Featured

OM is in the midst of 15 Days of Prayer for the Hindu world (find out more by clicking here). The Festival of Diwali, a Hindu festival that celebrates good overcoming evil, takes place in the midst of these 15 days (this year on November 4th).

Some Hindu background believers see this as an opportunity for contextualization, celebrating the general theme without including the Hindu religious figures. More conservative Christians may choose not to celebrate the festival. Our long time friend, Paul Neeley, has written several articles about the Festival of Diwali and its potential as a witness to the Hindu world when engaged with properly. See one of his articles below as well as a contextualized Diwali song!

Diwali (or Divali) comes from the Sanskrit word Deepavali which literally means ‘a row of lights.’ This auspicious holiday, known in English as the “festival of lights,” is celebrated by millions of people in India and in the Indian diaspora. For most, it marks the beginning of the New Year. It historically symbolizes the victory of good over evil, hope over despair, knowledge over ignorance, and celebrates light conquering darkness on community, family and personal levels.

Diwali has been celebrated for thousands of years in many locations, and has many layers of meanings and practices. For an overview of the festival, see
https://en.wikipedia.org/wiki/Diwali

The 5-day festival is happening right now in India; I first became aware of the ‘Festival of Lights’ when I was in India a year ago.

I was reminded of several posts on the excellent blog “Indigenous Jesus” about Diwali.

I’ll focus on a painted rangoli by a friend who created Christian content to fill the artform.

“Rangoli is an art form from India in which patterns are created on the floor in living rooms or courtyards using materials such as colored rice, dry flour, colored sand or flower petals. It is usually made during Diwali (Deepawali), Onam, Pongal and other Indian festivals. Designs are passed from one generation to the next, keeping both the art form and the tradition alive.”

Learn much more and see many examples at
https://en.wikipedia.org/wiki/Rangoli

Here’s a rangoli on the floor of a house formed with colored grains of rice: 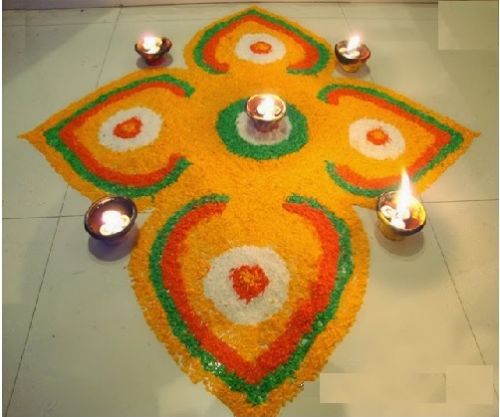 In this photo, a girl is creating a rangoli with flower petals. 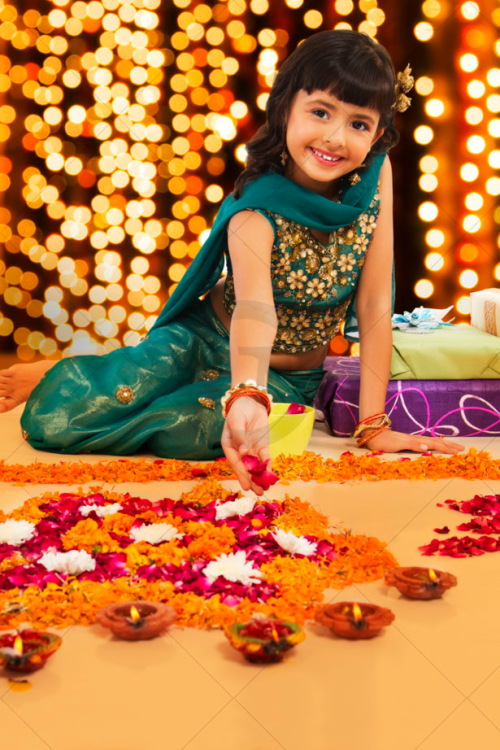 You see a number of small lamps. A Diwali Diya is a small lamp that is lit especially at Diwali. Diyas are typically made of clay with ghee (clarified butter)   or oil used as the fuel and cotton as the wick.
https://en.wikipedia.org/wiki/Diya_(lamp)

Here is a painting of a “Christocentric rangoli” by a friend: 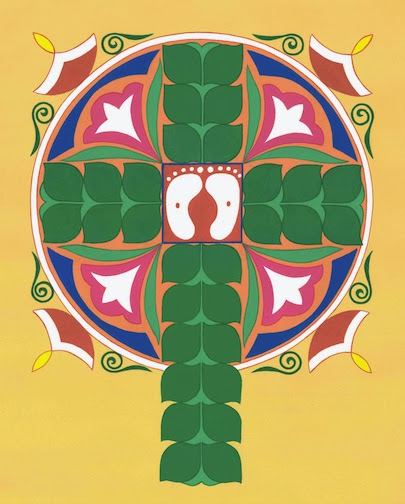 [A rangoli is] meant to be sacred welcoming [area] for the Hindu deities" (Wikipedia).  This one shows the pierced feet of Jesus in the middle, welcoming Him into one’s home.  John 1:1-5 tells us,

In the beginning was the Word, and the Word was with God, and the Word was God. He was in the beginning with God. All things were made through him, and without him was not any thing made that was made. In him was life, and the life was the light of men. The light shines in the darkness, and the darkness has not overcome it - a prominent theme during the Diwali ‘Festival of Lights.’  On the outside of the rangoli are four diya clay lamps.

This week, may Christ’s light shine in our hearts and be made manifest in our lives through His Holy Spirit!  May His Gospel speak to others through us as we welcome Him each day.  Pray for Hindus throughout the world that Christ would speak to their hearts during this festival and reveal Himself to them as the true Light of the World who has come to save us.

Here’s a new photo of an Indian friend who is a Christian and an artist, Bhavna. She’s holding a diya at the Diwali festival in Varanasi/Benares and writes, “Celebrating the light I found in Jesus at the river Ganges!” When I was in India last year at this time she co-created a beautiful rangoli with Christian content. 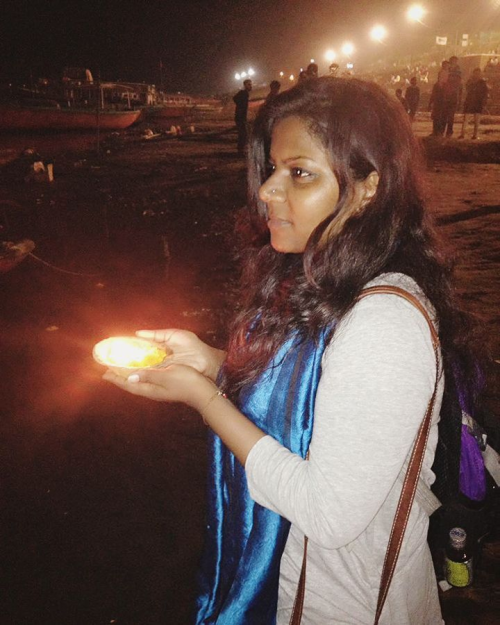 Use of this Painted Christocentric Rangoli in a Nepalese Prayer Book
http://indigenousjesus.blogspot.com/2012/10/2012-dashain-prayer-book.html

Some Christians celebrate certain aspects of the multi-day festival, others don’t. Learn more in these various perspectives:

Listen to the song by clicking here!

In the midst of this season, remember to pray for our Hindu background brothers and sisters, that they might shine the light of Jesus to those around them who desperately need it.

More in this category: « Collisions When We Cannot See »
back to top
© 2021 Inspiro Arts Alliance. &nbspA ministry of OM.
Some Photography provided by Garrett Nasrallah & Fritz Liedtke.